Who was Steve Gruetzmacher? 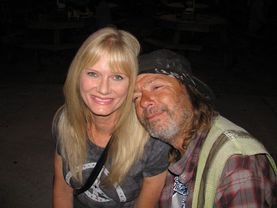 ​Steve was not a friend of mine in high school, but he sounded like the kind of person that I might have liked to be around back then. His sister described him as being intelligent, creative, a gifted artist, musician, and voracious reader.  He continued to be a voracious reader up until his untimely death at just fifty-eight years old. Steve enjoyed spending entire days at the public library reading up on a variety of topics. People that knew him said that he was well informed, and could talk about nearly any topic under the sun.  Children at Steve’s church seemed to particularly enjoy his company.

I first learned about Steve from my sister. She works in the optical department at a big box store in Tampa, Florida.  One day she received a phone call from a lady who explained that her brother was homeless and needed an eye exam and new pair of glasses. She went on to say the she lived in another part of the state, and asked if she could pay for these things over the phone.  My sister responded that this was not in keeping with company policy, but if the lady would provide her name and contact information, then my sister would speak with the Doctor to see what kind of accommodations might be made.

When the out of town lady on the other end of the phone gave her name - Debra Exum -  and contact information, and said the her brother’s name was Steve Gruetzmacher, my sister realized that she and Debra had been schoolmates in high school. They had even taken the same bus to school.

They spent a few minutes reminiscing about their old high school days, and then my sister suggested that Steve come see her at the store, and that she would pay for the services out of her own pocket, and that Debra could then reimburse her.  He did, she did, and she did.

Some months later when the weather was turning cold, Debra turned to my sister for help again. She explained that her brother needed a winter jacket and new pair of boots.  Again, my sister paid for the things, and again, Debra reimbursed my sister as promised.  This sort of thing happened a few times over the course of maybe three years.

While my sister felt that this was just a small thing to do, it brought Debra much comfort knowing that there was someone close by that Steve could turn to in times of extraordinary need.

Intelligent, creative, artistic, informed, friendly, funny… How does someone like this end up being homeless for the better part of three decades? I don’t know. A victim of bad choices, unfortunate circumstances, or simply personal preference? I just don’t know, but the story of this brother and sister estrangement and reunion is quite moving.  Rather than telling it here, I will refer you to a couple of newspaper stories.
​
​